Best Season: May to early September

Amidst the mystic of the Pir Panjal Range in Himachal Pradesh, the Manimahesh Lake, set at an altitude of 3,950 meters on the base of Manimahesh Kailash Peak, which towers at a height of 5,653 meters, is considered as one of the sacred lakes in the Indian Himalayan region. The lake is a popular Hindu pilgrimage site that is dedicated to Lord Shiva and it is believed that the mighty peak is the abode of the Hindu deity. The spiritual journey undertaken by thousands of pilgrims from different corners of the country commences on the auspicious day of Janmashtami and ends on Radha Asthami.

When talking about the mountain walkers, nature lovers and trekkers from all over the world, the journey to the Manimahesh Kailash is one of the most beautiful treks in Himachal Pradesh and even boasts the feet of amateurs. The Manimahesh Kailash Peak, which is also known as Chamba Kailash, is one of the virgin peaks in the Indian Himalayan region that is located approximately 26 kilometers from Bharmour in the Budhil valley. The pristine water of the Manimahesh Lake that is sourced out from the serpentine glacier of the Chamba Kailash Peak forms a tributary of River Bidhil.

The Manimahesh Kailash Trek upraises from Hadsar, which is a drive away distance from Dharamshala, and heads to Dancho that is perched at an altitude of 2,280 meters. From Dancho there is a gradual climb passing through the valley of flowers and wild medicinal herbs till the journey expunges to the last reach that cuts across the glacier of the lake. The Manimahesh Lake en circles a barren topography with small hilly mounds, boulders and dry bushes. The trek continues downhill to Dancho and then leads off at Dharamshala.

For the trekkers the journey to Manimahesh Kailash commences from the month of Mid May and continues till October. It is approximately a 9 days trek starting from Delhi and is one of the easiest treks in the Himachal Himalayan region.

Till July, there are high chances that trekkers will spot snowfall at high passes. But by the end of August, the amount of snow considerably reduces. As the months proceed, one might experience rainfall towards Kullu-Manali valley but at the high passes, Spiti, the weather remains sunny. Moving further, in September, the day temperature may range between 12°C and 20°C. However, the night is relatively chilly as temperature may dip to minus (-2 to 6 °C), also, there is the slightest possibility of snow fall. With the onset of October, the day temperature hovers around 12-18 °C and evenings and nights are comparatively colder (- 6 to 4 °C).

Where is the Manimahesh Kailash Trek

Commonly known as Dal Lake, Manimahesh is a high altitude lake of Himachal Pradesh. The lake is located at an elevation of 4,080 metres (13,390 ft), quite close to Manimahesh Kailash Peak in the Pir Panjal Range of the Himalaya. According to the incident published in the mythological books, the lake was created by Lord Shiva after he married Goddess Parvati. It is also believed that Lord Shiva performed penance here for seven hundred years, and the water started flowing from his tangled hair which later took the form of a lake. After Mansarovar Lake in Tiber, the Mani Mahesh lake is the most sacred lake. During September and October, the lake attracts many pilgrims as this is the time when ‘Manimahesh Yatra’ commences.

How to Reach Manimahesh Kailash Trek?

From Airport:Nearest airport is at Gaggal in Kangra (170 kms from Chamba).

By Road:Manimahesh is From Chamba (78 kms away) by road. Buses, taxis and coaches regularly plying from Chandigarh and Delhi. Chamba is 602 km from Delhi and 392 km from Chandigarh.

On arrival at Pathankot train station meet our guide and then travel to Dalhousie. Upon arrival at Dalhousie check into the hotel and in the evening visit the wonderful local sightseeing and attractions of the startling hill station Dalhousie.

After having a light feast at Dalhousie we will move forward to visit the Kalatop wildlife sanctuary, then in the direction of Khajiyar. Take pleasure of the natural pictorial beauty of Mini Switzerland and take lunch. After having lunch we will move to Bharmour through Chamba. You will check into the hotel after reaching at Bharmour and later in the evening, visit at the Chaurasi Temple and the grand Aarti.

In the morning, after a hearty breakfast, we will move forward to the Bharmani Temple with packed lunch. This temple is positioned on the crest and is about 3 kilometers trekking from Bharmour. In the evening we will return to Bharmour and then check into hotel for night stay.

After having breakfast and taking packed lunch along, we will head forward to Hadsar and then Dhanaul by means of taxi. From Dhanual, we will embark on the famous Manimahesh Parikrama trek. After moving for about 2 to 3 hours alongside the stunning Bhujla stream, you will reach at an unexplored and striking Village Kugti. Famous as the Bharmour’s last village, you can relax enjoy the rest of the day in the camp.

On the day, we will have breakfast at about 6:00 AM in the morning and then will begin the trek to the Kartik temple with packed lunch. The temple has been built in the memory of the son of the Lord Shiva ‘Kartik’. After we reach the Kartik temple you can glimpse the exquisite beauty of fabulous surroundings and enjoy your lunch. After having lunch we will move to another stunning camp site located at Dalotu. After we reach at the camp site check into the camp and enjoy the left day relaxing in serene surrounds.

On the day Six, after having early morning breakfast at the campsite the troop will move ahead through the thick forests, cross a tiny stream over a bridge made up of wood, then ascend for ½ hour nearby stream’s bank. After an alpine walk for about ½ hour over the stones the trail ascends for another steeply 2 ½ hours to reach the Alyas. You can enjoy the entire day in the serene and spectacular surroundings after having lunch at this camping site and after having dinner rest in the tents for the night.

Alyas to Manimahesh Lake is a 12 kilometre trek that totally depends on the weather conditions and the trekker’s physical condition, thereby avoiding the risk of trek and will pause until the sky clear up. If later the sunshine, then after having a simple breakfast and taking along the packed lunch we will move ahead at 5 AM. After a part over moraine, an evident trek in snow, though well-trodden. We will cross the pass and then move forward through for about ½ hour the expedition will reach the destination Kamal Kund. Kamal Kund is a beautiful quaint lake which is dedicated to the Lord Shiva. Next, we will move forward to the next destination Manimahesh Lake. A sacred dip will be taken in lake and the whole day would be spent nearby Manimahesh camp site.

On the eighth morning, after simple breakfast, the troop will begin the trek descending towards Gourikund. The troop will explore Gourikund. Here, we can spend almost ½ hour and then continue the trek to Dhancho. Here, we can enjoy the wonderful waterfall and take lunch and have a rest for getting ready for the Hadsar trek. Here, we can get taxi and head to Bahrmour. Upon arrival to this place and check into the hotel.

After a light breakfast, we will depart from Bharmour. The troop will move to Chamba take the lunch here and visit the Bhuri Singh Museum and Laxmi Narayan Temple located at Chamba. After that travel further to Pathankot and from here catch a train for Delhi. Overnight journey. 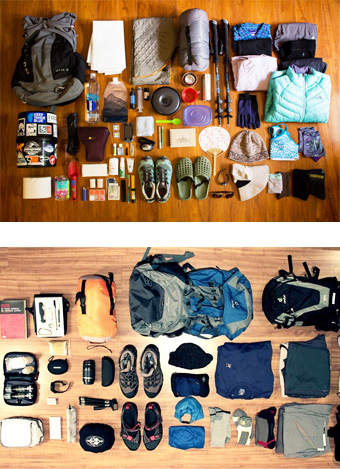 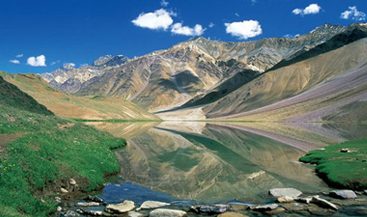 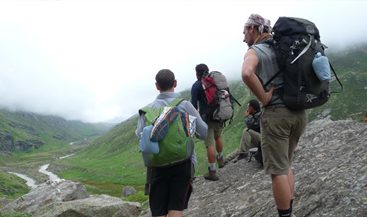 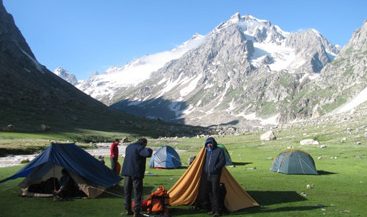 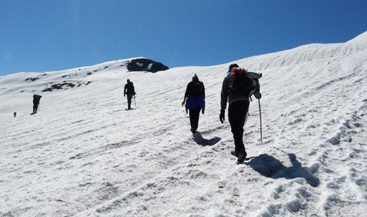